With a tale about castrating a camel when the circus came to town, Brian Faulkner, from the Speak Easy at Martlesham Speakers’ Club, won the Toastmasters International UK and Ireland Humorous Speech Contest on Saturday 9th November 2013 during the Boadicea Conference at the Crowne Plaza Resort, near Colchester, Essex.

Brian, a vet from Wickham Market, won the Club, Area, Division and District Semi-final Contests to compete against five other finalists in the District 71 Finals in front of an audience of nearly 300 top speakers from all over the UK and Ireland.

“The audience was phenomenal!” said Brian.  “My antics with the poor camel were received with much laughter and cheering which really spurred me on. There’s nothing like a Toastmasters audience to get you going!”

“But the judges were also looking for speech development, body language, and a strong, confident delivery – attributes which I have been learning and practising during my five years as a member of the Speak Easy Club.”

Runner up in the District 71 Table Topics Contest Final was James McGinty, a member of several Toastmaster clubs in Area One, covering Suffolk and Essex. His ability to think on his feet carried the day during the impromptu speech semi finals on Saturday, and the finals on Sunday.

Congratulations to all contestants, who faced an audience of over 300 Toastmasters and guests at the Boadicea Conference – so superbly organised by Constance Turner, Alan Todd from Ipswich Electrifiers, Caroline Swain, and many other volunteers over the week-end. 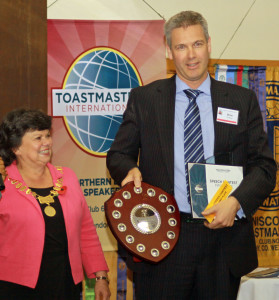 And the winner was … Brian Faulkner, receiving his trophy at the Boadicea Conference from District Governor Luanne Kent. Photo by Buster Todd.