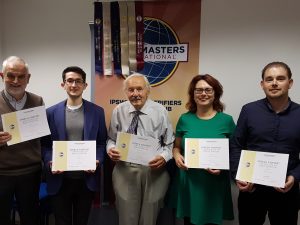 27th September was the club Humorous Speech and best Table Topic contest. For the competitive member taking part is a natural thing to do but there are many more reasons to get involved.

Creating and preparing a competition speech allows us to bring together all the things we’ve learned and find out just what we are capable of. Winning at club opens a route to competing at higher levels, against other winning speeches and in front of a larger and less familiar audience. Whether you are someone who is highly competitive or just want to find your own ‘personal best’ and see how you react outside the familiarity of the club, it’s a great opportunity for all.

Benefits of being contest chair

As members we learn to effectively lead a standard meeting but contest chair turns it up a notch. Organising the agenda, motivating the members, briefing the contestants, ensuring the paperwork is ready, signed and processed is no mean feat, it’s also your privilege to hand out the certificates. It’s hard to take this role on without a major growth in the ability to lead and it’s also huge fun.

Benefits of being chief judge

As chief judge you organise and lead the team of judges, timers and counters. Ensuring everyone understands their role and responsibilities, dealing with disqualifications and ensuring the right results are given. This role is practise in clear communication, efficiency and team leading.

Benefits of being a judge

The role of the chief judge is to organise the judges, the actual judging is done by a team of judges who have to consider each speech against a strict set of criteria. Judging gives first hand insight into what makes a winning speech as well as practise in active listening.

Benefits of being a timer

In a standard meeting timing helps us speak to the time given, in a contest timing can be the difference between winning a contest and disqualification, which is why you’ll be one of two timers at a contest. As a timer you get to be a key part of the judging team, the remit is straightforward but it takes concentration to accurately time each speech. It’s a great way to support the contest

Benefits of being a counter

Counters collect the judges ballots and tally the results under the guidance of the chief judge. In one respect it’s a simple role if you are comfortable with basic numbers but you’ll be seeing the different views across the judging team and will be one of the first few to see the results so it’s also a hugely exciting and insightful role.

Benefits of attending as an audience member

If the club is large enough and the turnout on the night is high enough you may find you don’t have a defined role, yet every speaker needs an audience and when the whole audience are busy timing, judging and otherwise ensuring the process is being followed the speaker can find the atmosphere a little ‘flat’. As an audience member you not only support the contestants and get a hugely entertaining evening but find there is a great deal to learn both from the speaker’s delivery and the content of their speeches.

Club contests are held twice a year around September and April time and winners will go on to compete at higher levels within Toastmasters International.

See the contest schedule for the next stages